A Talk on Language Teaching Methodology 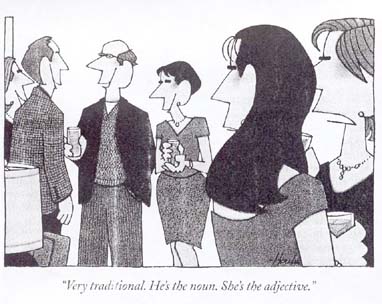 This talk is meant to be accompanied by a videotape of the actual demonstration of teaching grammar interactively to a class in Indonesian, held at SEASSI 1993 in Seattle, WA.

In this demonstration, I use an interactive

approach to teach the syntax of noun phrases in Indonesian. I begin with a review of English grammar, eliciting from them whatever explicit knowledge they have of the grammar of English noun phrases, and summarize this on the board: what emerges from this is that English noun phrases contain nouns or pronouns (we define them in a `schoolbook' way as name of a person, place or thing,) adjectives, numerals and other quantifiers, demonstratives (this, that), definite and indefinite articles, and some people even mention gerunds. We establish several things:

After this brief recap of what the students know/remember about this subject, I ask for volunteers to represent the constituents of an English noun phrase. I have prepared large cards with nouns, adjectives, and other modifers on them, and they have to organize themselves into an acceptable Noun Phrase They do this with some reluctance and rolling of eyes etc. because at this point they see it as childish. However it does require them to cooperate in producing an acceptable Noun Phrase, and it reminds them that the order is not free---the adjectives are closest to the Noun, the quantifiers in front of the adjs, the demonstratives before that, etc. They begin to realize that there is something here we haven't discussed, and which may have never been known explicitly by them up to this point---that the order of constituents in a Noun Phrase is not random. The cooperative aspect leads them to learn this experientially, rather than from the grammarian speaking ex cathedra.

However, it turns out that this is not correct. I have deliberately included a numeral in the lineup, and Indonesian cardinal numerals are not found on the right of the Noun, only ordinal numerals. To make a cardinal numeral ordinal, a prefix ke- must be added, i.e. tiga `three' must be converted to ketiga `3rd'. But this may change the meaning of the sentence, so we have to decide what we want. If we want to retain the meaning `3', we have to send the numeral back to the other side.

In this demonstration here, I also do an explicit activity involving a `possessive' Noun Phrase, i.e. `my child's teacher's name' since there is the difference that English possessives are morphologically marked, but Indonesian possessives are not. When a phrase like English `my child's teacher's name' is converted into its Indonesian equivalent, the syntax is the mirror image of English, i.e. nama guru anak saya, but there is no marking of possession; this business of stringing out a series of nouns or pronouns tends to throw English speakers for a loop when they first encounter it, and also because saya means both `I' and `my', depending on the syntax. That is, it is the syntax alone that indicates possession here; if a Noun follows a Noun in Indonesian, the relationship is one of possession, i.e. A + B means `B's A'. English speakers expect some kind of marker of possession (stem-alternate pronouns I/my, apostrophe s). I emphasize this point because it is a sticking point---the constituents are indeed in the mirror image order in Indonesian, but that's all you get.

At this point I ask for volunteers to organize some noun phrases using cards I have prepared, or to prepare other cards. I ask for a volunteer to represent a noun, who is then expected to recruit some other modifiers to form a sentence. Again, some reluctance and eye-rolling, but when the students are on their own, things may sort of fall apart unless they cooperate. I remind the noun that she is in charge; it's her Noun Phrase, and she needs to organize it (reminding them that this is not a free-for-all, there is a hierarchy). This she does, and the others have to cooperate by lining up appropriately.

Then we convert the Noun Phrase to an Indonesian Noun Phrase, and as I had hoped, there is a problem. There is a quantifier banyak `many, much' which has gotten onto the wrong side, and it must be sent back. But wait; the teacher in this class points out that banyak MAY occur on the right, but with a different meaning: here it would mean THE many ... Here we have another insight about Indonesian Noun Phrase syntax that is not usually explicitly taught. Another problem is that one cannot have a long string of adjectives in Indonesian comparable to English `the many large blue expensive cars' etc. When there are multiple adjectives in Indonesian, relative clauses must be employed using yang etc.

The students are beginning to get serious now; they realize that this process reveals things that they did not know (their teachers know it, but don't explicitly teach it), but has not been explicitly dealt with in the grammars, the teaching materials etc. of Indonesian. They stop acting silly and begin to think about what is going on. There is a discovery process going on; they are discovering things they did not know, and we are leading them to that discovery.

Pedagogically, now, we need to build on this realization process here by continuing to have students make up a few more Noun Phrases. One could

Why Not Just Do Chalk-Talks?

The question typically arises here as to why this is better pedagogically than the usual `chalk-talk' grammar session, where the teacher writes things on the board and lectures to the students. After all, someone will be sure to mention, `the content is exactly the same.' This is absolutely true. However, when I use this approach I notice the following:

One final point; why do I start with English word order and not just skip to Indonesian?